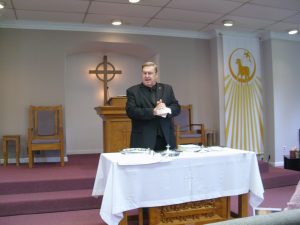 After a 10 month battle with cancer, Reverend David Lesley Taylor of Bowie, Maryland passed away in his home on Thursday, July 19, 2018 at the age of 73.

David completed both his Bachelors then Masters of Theology at Andersonville Baptist College & Seminary via their distance learning program. Before entering the ministry, David worked in electronics for various employers in western New York where both he and Margaret were born and raised. David received his training in electronics in the US Army, enlisting in July

David was always active in his local communities. He made a point to be involved with other local pastors and churches in prayer groups, bible studies, and official organizations such as Evangelical Ministers Fellowship and Promise Keepers. He was deeply involved in his own Seventh Day Baptist denomination, directing numerous years of Youth Pre-Con, church camps and retreats, and serving many years on the SDB Missionary Board. His heart and passion for leadership training in ministry led him to become actively involved in a church leadership training program in Plainfield, NJ. He was also foundational in establishing the TIME Program in Brazil (a Seventh Day Baptist denominational program for training of ministers and lay-leadership in local churches). This involvement led to several lengthy trips to Brazil beginning in 2009, and their last trip in 2017, just 8 months before his diagnosis.

David always had a deep love for music. He learned to play the accordion, bass guitar, and keyboards. Before he became a pastor, he played “country rock” locally in a band with his brother Allan and friends. They could also be found calling square dances at the local grange, where David met Margaret, his wife of 54 years. He told his mother that same night that he had met the woman he was going to marry. He and Margaret were married on May 16, 1964. She was by his side, holding his hand as he passed.

In lieu of flowers, the family asks donations be sent to the Central Seventh Day Baptist Church at the address below. All funds will be distributed directly to the leadership training programs in the US and Brazil that meant so much to David in his ministry.

Mark checks “in memoriam – DLT” and send to:

Gospel of John Memorial Service Moving Toward Passover and the Crucifixion